VSDIF supports more than 300 Camera RAW Formats. It is the most advanced Duplicate Image Finder on the market and we are constantly improving it. This is an exceptional FREE update for our registered users as we provide 10 new RAW formats in this release. 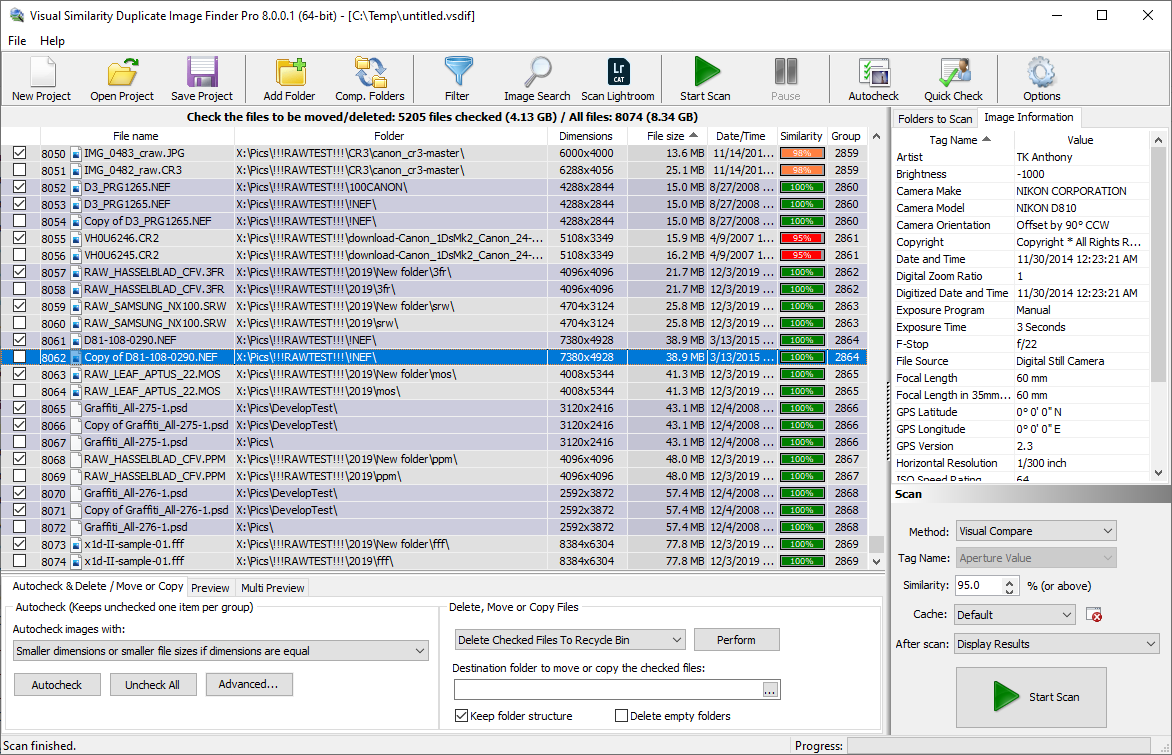 You may also be interested to read about other formats that we have recently included:

Canon, like other manufacturers, uses file extensions to separate their digital image files from the competitors. This extension tells the computer program if it can use it or not. The CR3 file is a Canon Raw format, which has the highest quality reproduction of the scene you are shooting.

As the CR3 file is a relatively new file format, your computer might not let you preview CR3 file type images. To edit CR3 files, you need access to an editing software platform that can read them.

Many raw file formats, including IIQ (Phase One), 3FR (Hasselblad), DCR, K25, KDC (Kodak), CRW CR2 CR3 (Canon), ERF (Epson), MEF (Mamiya), MOS (Leaf), NEF NRW (Nikon), ORF (Olympus), PEF (Pentax), RW2 (Panasonic) and ARW, SRF, SR2 (Sony), are based on the TIFF file format. These files may deviate from the TIFF standard in a number of ways, including the use of a non-standard file header, the inclusion of additional image tags and the encryption of some of the tagged data.

An FFF file is a raw camera image created by various Hasselblad digital camera models, including H6D-400C MS and X1D II 50C. It stores uncompressed image data exactly how it was captured by the CCD, which allows for higher resolution images than compressed image data. FFF files are typically used by professional photographers because they store higher quality images that can be more accurately edited.

Phase One is a Danish company specializing in high-end digital photography equipment and software. They manufacture open platform based medium format camera systems and solutions. Their own RAW processing software, Capture One, supports many DSLRs besides their backs.

PODAS workshops (Phase One Digital Artist Series) is a series of worldwide photography workshops designed for digital photographers interested in working with medium format, high-resolution cameras. PODAS is a part of the Phase One educational division. Each attendee receives a Phase One digital camera system for the duration of the workshop.

On 18 February 2014, it was announced that UK-based private equity firm Silverfleet Capital would acquire a 60% majority stake in the company.

On June 17th, 2019, Phase One A/S was once again sold, this time to the Danish investment company Axcel.

The Eastman Kodak Company (referred to simply as Kodak /ˈkoʊdæk/) is an American technology company that produces camera-related products with its historic basis on photography. The company is headquartered in Rochester, New York, and is incorporated in New Jersey. Kodak provides packaging, functional printing, graphic communications and professional services for businesses around the world. Its main business segments are Print Systems, Enterprise Inkjet Systems, Micro 3D Printing and Packaging, Software and Solutions, and Consumer and Film.It is best known for photographic film products.

Kodak was founded by George Eastman and Henry A. Strong on September 4, 1888. During most of the 20th century, Kodak held a dominant position in photographic film. The company’s ubiquity was such that its “Kodak moment” tagline entered the common lexicon to describe a personal event that was demanded to be recorded for posterity. Kodak began to struggle financially in the late 1990s, as a result of the decline in sales of photographic film and its slowness in transitioning to digital photography, despite developing the first self-contained digital camera. As a part of a turnaround strategy, Kodak began to focus on digital photography and digital printing, and attempted to generate revenues through aggressive patent litigation.

The company was founded as Asahi Kogaku Goshi Kaisha in November 1919 by Kumao Kajiwara, at a shop in the Toshima suburb of Tokyo, and began producing spectacle lenses (which it still manufactures). In 1938 it changed its name to Asahi Optical Co., Ltd. (旭光学工業株式会社 Asahi Kōgaku Kōgyō Kabushiki-gaisha), and by this time it was also manufacturing camera/cine lenses. In the lead-up to World War II, Asahi Optical devoted much of its time to fulfilling military contracts for optical instruments. At the end of the war Asahi Optical was disbanded by the occupying powers, being allowed to re-form in 1948. The company resumed its pre-war activities, manufacturing binoculars and consumer camera lenses for Konishiroku and Chiyoda Kōgaku Seikō (later Konica and Minolta respectively).

Logitech International S.A. (/ˈlɒdʒɪtɛk/ LO-ji-tek; often shortened to Logi) is an American-Swiss provider of personal computer and mobile peripherals, with dual headquarters in Lausanne, Switzerland and Newark, California. The company has offices throughout Europe, Asia and the rest of the Americas. Logitech’s sales and marketing activities are organized into four geographic regions: Americas, Europe, Middle East & Africa, and Asia Pacific.

The name Logitech is derived from the French word for software, “logiciel”. In Japan, Logitech was established as Logicool to avoid conflict with the Logitec brand.
Contents

Minolta Co., Ltd. (ミノルタ Minoruta) was a Japanese manufacturer of cameras, camera accessories, photocopiers, fax machines, and laser printers. Minolta was founded in Osaka, Japan, in 1928 as Nichi-Doku Shashinki Shōten (日独写真機商店, meaning Japanese-German camera shop). It is perhaps best known for making the first integrated autofocus 35 mm SLR camera system. In 1931, the company adopted its current name, an acronym for “Mechanism, Instruments, Optics, and Lenses by Tashima”. In 1933, the brand name first appeared on a camera, a copy of the Plaubel Makina simply called “Minolta”.

In 2003, Minolta merged with Konica to form Konica Minolta. On 19 January 2006, Konica Minolta announced that it was leaving the camera and photo business, and that it would sell a portion of its SLR camera business to Sony as part of its move to pull completely out of the business of selling cameras and photographic film.

Agfa-Gevaert N.V. (Agfa) is a Belgian-German multinational corporation that develops, manufactures, and distributes analogue and digital imaging products and systems, as well as IT solutions.[buzzword] The company has three divisions. Agfa Graphics offers integrated prepress and industrial inkjet systems to the printing and graphics industries. Agfa HealthCare supplies hospitals and other care organisations with imaging products and systems, as well as information systems. Agfa Specialty Products supplies products to various industrial markets. It is part of the Agfa Materials organization. In addition to the Agfa Specialty Products activities, Agfa Materials also supplies film and related products to Agfa Graphics and Agfa HealthCare.

Agfa film and cameras were once prominent consumer products. However, in 2004, the consumer imaging division was sold to a company founded via management buyout. AgfaPhoto GmbH, as the new company was called, filed for bankruptcy after just one year. The brands are now licensed to other companies by AgfaPhoto Holding GmbH, a holding firm. Following this sale, Agfa-Gevaert’s commerce today is 100% business-to-business.