Easy Screen Capture And Annotation 3.0.0.0 Is Released Packed With Plenty Of New Features

This version provides Full Unicode Support – you can now add annotations in multiple languages simultaneously. While older versions of Easy Screen Capture supported up to two alphabets (Languages) simultaneously, version 3 lifts this limit completely. Annotations can now be applied in any alphabet like Chinese, Japanese, Latin, Cyrillic and so on.

In Windows 7 and Windows Vista the windows are now captured with complete transparency – support for the Windows Aero themes. This includes the window frame and any transparent regions that they may include. The application also captures the transparent shadow effect of the Windows 7 and Windows Vista user interface. The captured layers can be saved directly as PNG files using the context menu Layer->Save as… or multiple transparent layers can be grouped together and saved to a file format that supports transparency. This is possible due to the new feature that allows exporting project files with transparent background. (read below). 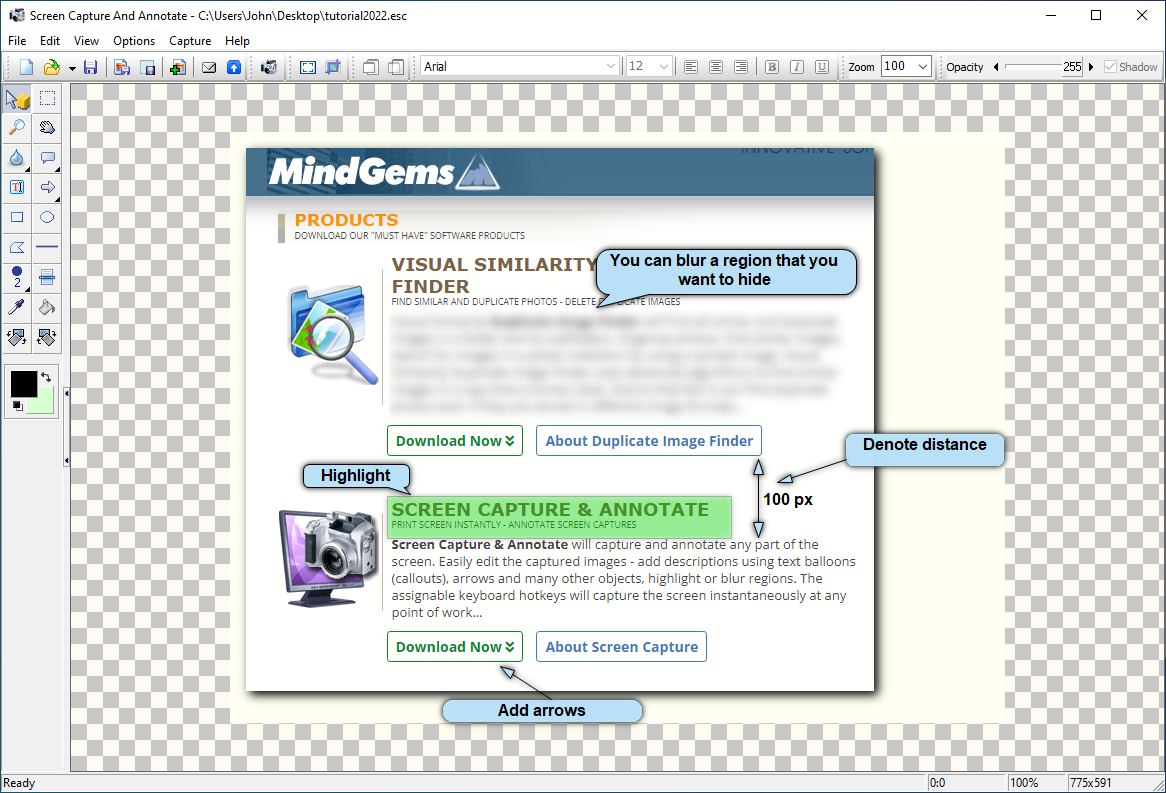 In addition to the new Aero theme screen capture options this new version adds a lot of extra improvements. Transparency is improved and the captured themed round windows look smooth and polished. On systems that do not have shadow effect enabled it can be added using the layer context menu.

As you may already know Easy Screen Capture And Annotation provides free screenshot hosting by providing instant screen capture upload to PhotoBucket. There is a free signup button inside the application that will let you create and setup your image hosting account. Uploading and sharing captures requires just a single click. Create the capture, add annotations and hit the “Upload to PhotoBucket” button. The link to the uploaded image is copied to the clipboard automatically and you can easily paste it in instant messaging applications like Skype, AOL, MSN Chat, Google Chat or share it on Facebook, Google Plus or other social networks. This version provides also some small fixes for issues related to daylight saving time. In past releases some PhotoBucket passwords with certain special characters were not saved properly in settings – this issue is now resolved.

As already mentioned above version 3.0.0.0 provides options to export projects with transparent background. This setting is available in the canvas settings dialog and will be utilized only when exporting to formats that support transparency like PNG.

This is a major release and it includes a lot of new features and improvements. The most important ones are included in the application’s What’s New List. Some of them that are worth mentioning are the new capture tool button and tray icon. The tool button and tray icon can now be used to perform the last capture operation. Single mouse click with the left mouse button will start the last used capture mode, while double click will display the main application window.

When capturing a color there is a notification in the system tray displaying the color’s hexadecimal value that is ready to be used in HTML format. The value is also automatically copied to the clipboard.

Image size information is updated on fit operation and the when resizing the canvas to fit all objects the vertical size issue is fixed.

Please drop us your recommendations in the comments.

Easy Screen Capture and Annotation 2.5.0.0 is released packed with plenty of new features.

The Layer Save As option ( including transparency ) will let you save parts of the capture project. The layer context menu option “Restore original layer size” will restore the size of the layer to the one that it was captured at.

You can now add a shadow effect to the layers in order to produce a stylish image that you can upload to your blog or publish on the web.

The improved option to capture an entire window will also capture the transparency of round windows in Windows XP, Vista, Windows 7.  Please read the What’s New section below for a full list of the new feature and improvements.

A new release of Easy Screen Capture And Annotation is available for download. A major update in this version includes the free image hosing and upload to PhotoBucket. This new feature lets you upload your captures instantly on the web and send the link to anyone using your messaging software or email. The application provides also a button in the settings panel for signing up for a free PhotoBucket.com account. The setup process takes only few minutes. 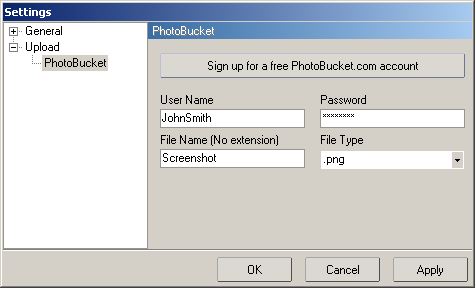 This new version also improves the rendering engine and provides smooth aliased callouts and text balloons. Some minor issues are also fixed and a tool button that gives you a quick access to the recently opened files list is added.

We would like to thank all our users for their support and feedback. Please keep sending us your feedback and suggestions. We will be glad to implement and add them to the upcoming versions.

Easy Screen Capture and Annotation 2.3.0.0 is released packed with many new features. Resize canvas to include all objects – Fit will let you easily cut off the excess area around your composition. You also can set this option to be automatically performed before saving the project as a raster image. This way Easy Screen Capture and Annotation will automatically resize the canvas so that there is no blank space outside the area of objects and layers.

The button next to the background and foreground color indicator will let you easily reset the foreground color to black and the background to white.
You can use the Line Tool to draw lines and underline parts of your capture easily.
The toolbar is extended and now includes some buttons that are used often – Fit, Crop Selection etc.

In addition to the new features a lot of bug fixes are applied. The undo system now supports all the actions. A lot of fixes for multiple selection and interaction on objects and layers are applied. Some small interface improvements are also applied. We thank our customers for their reports and emails. We are glad to hear your suggestions and bug reports. Do not hesitate to contact us. We will get back to you immediately as usual.

The latest version of Easy Screen Capture And Annotation will let you capture scrolling windows. Using this new feature you can capture the entire content of a window with scrollbars. For example you can capture an entire web page as a single image or you can list the content of a folder in a single capture. This brand new feature is just one of the many features available in this major update. Please take a look at the what’s new list for more details. The fully functional new version is available for download here.

Easy Screen Capture And Annotation is released for download

Easy Screen Capture And Annotation is released for download. An excellent addition to our “Must Have” collection of software products. Designed to save you precious time Easy Screen Capture And Annotation combines capture end edit features in one product. You can create dazzling captures in seconds and share them via email, via instant messaging clients or publish them on the internet. The product supports huge amount of image formats.

Why Easy Screen Capture And Annotation is Better?

What makes Easy Screen Capture And Annotation better than similar tools is the fact that you can quickly annotate any part of the screenshot. There are plenty of object, arrows, text balloons and other annotation objects. It is easy to add several notes and arrows and make it clear for the recipient what he has to do.

Easy Screen Capture And Annotation can capture multiple types of screenshots – entire screen, a window, menu, user specified area and much more. The option to capture a scrolling window makes it easy to take a screenshot of entire web page, directory listing or any other type of list that does not fit on the screen. Read more about Easy Screen Capture And Annotation. There is a FREE download available.

Easy Screen Capture And Annotation is coming out soon

We are proud to announce a new tool that will go in our “Must Have” collection. Easy Screen Capture And Annotation will allow you to capture screen ( print screen ) with the press of a hotkey. It will also allow you to edit the captured images saving you funds that you would otherwise spend on image processing products. The tool will allow you not only to capture images, but to add also annotations, arrows, symbols, text notes and many more. This all in one jewel will save you plenty of time and money combining all the features that you need to produce a quality screenshots in a single powerful application. It is easy and ready to use for the novice users, but at the same time it gives you a plenty of options that an advanced user would expect.