Audio Dedupe is popular for its features that go beyond the standard duplicate file finders. Audio Dedupe can find similar and duplicate songs regardless of the file format. It analyzes the files and “Listens” to the audio file in order to find similarities. It can identify exact duplicates or remixes of the same song stored in various audio file formats. The tool supports most of the popular aduio formats and will put an end to the mess in you music collection, iTunes, iPod, iPad, iPhone or other mp3 player devices. Here are some of the supported file formats: Supports MP3, MP2, MP1, MPA, WAV, OGG, AIFF, AAC, MP4, FLAC, AC3, WavPack (WV), Musepack (MPC) and Windows Media Audio (WMA) file formats.

The key improvements in this release extracted directly from the Duplicate MP3 Finder’s What’s new page:

Not all improvements are listed above, but these are just a few of the new features and fixes in this release. 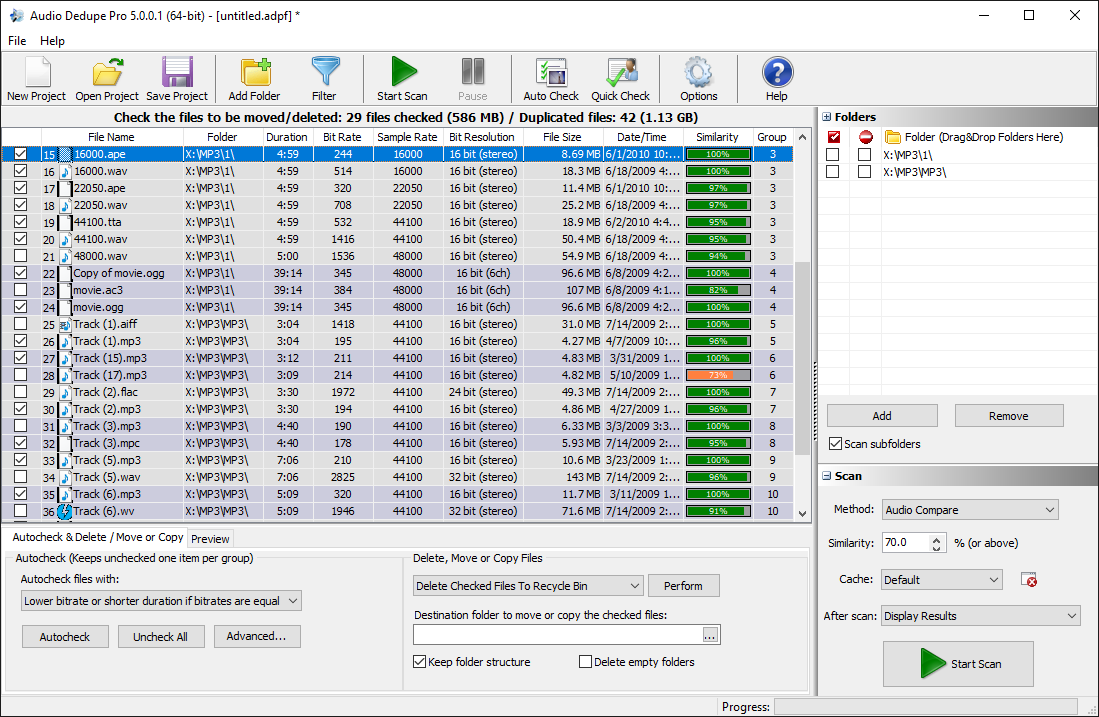 The Key New Features Of The Duplicate Audio Finder Tool

The filtering panel provides a handy new option that makes it possible to filter folders by a phrase including wildcards. If the text “original” is entered – all the folders that contain “original” in the name will be matched. Vertical line e.g.: “copy|backup|bckp” can be used in order to specify and combine several phrases. Using the above example all the folders that contain “copy”,“backup” or “bckp” will be matched. A more sophisticated example is “b??(*)*” – it will match all folders starting with “b” followed by two characters then an opening bracket followed by one character and then a closing bracket followed by any number of characters. 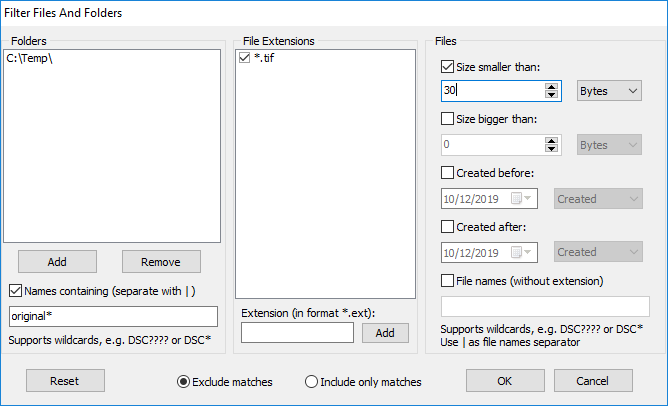 Exclusion from “Auto-check” or from “Self-scan” can now be set for all folders in the list by clicking on the header of the corresponding column. The browse for folder dialog is also updated. If no folders are checked, the currently selected folder is added. This makes it easier to add a single folder to the list and saves the extra click to check it.

Every delete/move file operation that fails displays a HEX (hexadecimal) error code. That makes it easier to isolate the issue e.g. if the files is locked by another application, if the user account used to start the application does not have sufficient permissions to manipulate the file, if the file is stored on a read only media and so on. All the error codes can be found at the Duplicate MP3 Finder FAQ page

“Keep Folder Structure while moving files” is now optional. In previous versions of Audio Dedupe it was ON by default. Name conflicts in cases where there are more files with the same name from different locations that should be moved to the same backup folder are also solved. If the file “Intro.mp3” for example is moved to the same folder from multiple locations the extra copies will be moved with the name “Intro (1).mp3”, “Intro (2).mp3” and so on. While it does not make much sense if the source files are exact duplicates it is useful to preserve the source files if they are similar versions, but not 100% duplicates.

Do you have suggestions? Do you miss a feature? Let us know in the comments below. We will be glad to hear from you!